More than 12,000 burials in Booker T. Washington Cemetery are preserved in three (unindexed) binders at the Belleville Public Library and the East St. Louis Public Library.

The first two binders contain a daily listing of the burials, the price paid for the lot or burial, and the grave location by section or block, row and grave number.

The third binder contains the information about the lots. In most cases, the entries include the name of the owner(s), lot and section numbers, and the names of those buried within the lot. The dates listed are burial dates.

Some notations in the ledgers indicate bodies were moved from Douglas Cemetery. Several tombstones pre-date the cemetery’s dedication. There are no records available from August 1903 to September 1919.

Photocopies of the ledger books and the old card file are available for research in the libraries. The original records are in fragile condition, stored in the vault for safe keeping, and are not available for public viewing.

The St. Clair County Genealogical Society is extremely grateful to Ms. Patricia Little for her most generous donation of the seven ledger books and an copy of the original lot cards.

Booker T. Washington Cemetery is located at Millstadt Road and Route 163 near the intersection of Hwy 157 in Centreville. This cemetery was founded by Russie McCullen “R. M. C.” Green. Mr. Green was an African-American undertaker who moved to the East St. Louis area about 1902. The cemetery was dedicated on 26 August 1903. The original cemetery plat covered 17 acres. Russie McCullen Green, born 24 November 1878, in Illinois, was the son of Felix (Phelix) and Charlotte Green. He lived in Edwardsville, Illinois, with his family before his marriage to Daisy Louise Carter. R. M. C. operated funeral parlors in St. Louis, Missouri, (Green Undertaking Company and Green Funeral Home) with his brothers Frederick and Charles. Until the early 1920’s, there were only two black funeral homes with licensed owners, R. M. C. Green and Charles T. Nash. Nash’s Funeral Home was established about 1913.

Mr. Green supposedly buried the victims of the 1917 East St. Louis Riot in Booker T. Washington Cemetery. Based on various reports, 38 to 200 African-Americans lost their lives during this time. Stories are told of East St. Louis residents hiding in the cemetery to escape the violence at the height of the riot. Mr. Green reportedly made his cemetery available to the children of his area who died in a flu epidemic during the 1940s. One reference indicates about 50 infants and children died of the flu and were buried there. Although this statement has not been verified, the late Sandi Bennett of SCCGS, said that a section in the cemetery contains about 50 unidentified infant/children graves.

R. M. C. Green died 31 January 1957 and is buried in Booker T. Washington Cemetery along with his wife Daisy who died in 1947, and his son, Edgar, who died in 1962. Edgar’s wife, Gertrude Hudson Green, died in 1973. After her death, her brother, Andrew Lee Hudson and caretaker James Oldham did their best to keep the cemetery in a functional condition until the mid 1980s. 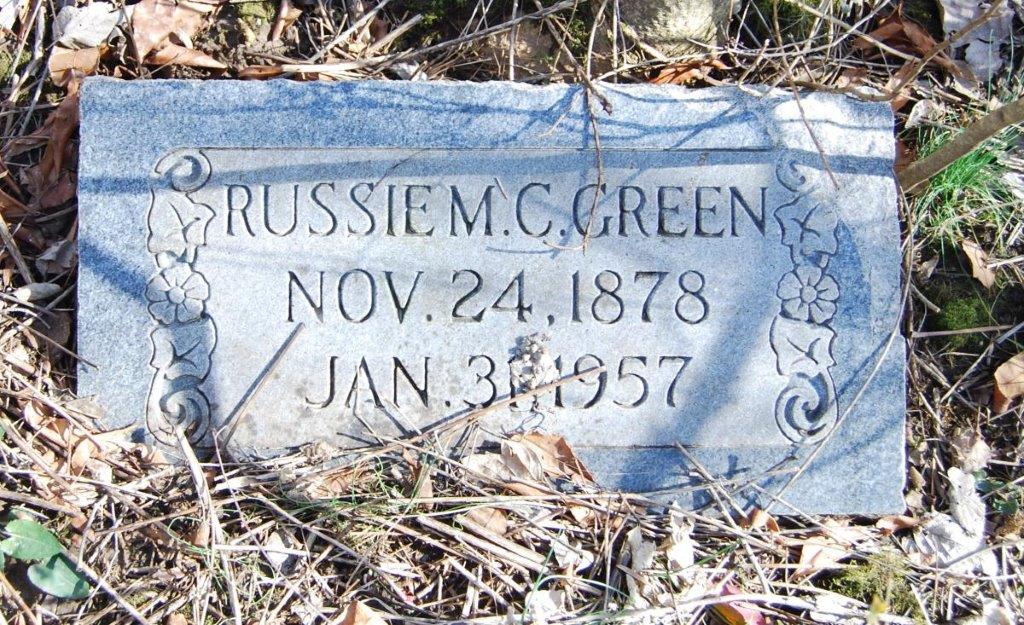 Eventually, the current remaining eight (8) acres were abandoned for lack of any financial support. Booker T. Washington Cemetery did not have a perpetual care program for the graves. The present ownership of this cemetery is undetermined (2018). The cemetery is in poor condition, weeds cover the graves, and suffers from flooding, criminal activity and illegal dumping. Heartbreaking pictures of the cemetery appear on several websites.